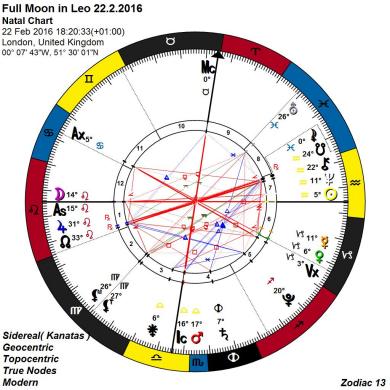 The Full Moon in Leo this month brings in a strong dominating energy that wants to be noticed and adored. This gracious and arrogant Moon is very optimistic, especially when it comes to love and romance. Partying, creativity and youth will be the highlights of this Full Moon.

The only problem is, with the Moon in Leo, is knowing when to stop! and listen to her gut feelings; being vulnerable to flattery can be her downfall unless her efforts to improve herself are sincere. This is a great time for creative pursuits and entertainment, as long as they are constructive and disciplined; but in a magnificent way of course!

In opposition to Neptune the Moon in Leo is in danger of allowing wishful thinking to lead her astray, specifically in the area of money, marriage and creative pursuits. There is a distorted sense of reality with this aspect that can cause one to over indulge and become immersed in addictive behavior, whether it is food, chemical substances, gambling or sex. With Neptune opposing our Moon, there is a great need for us to be honest with ourselves, as well as others; too much of a good thing can cause a lot of problems in our close relationships, or our reputations. It is important for us to stay grounded this Full Moon and keep our finances in order. Relationships are under intense stress with this aspect and it will be to our own detriment, if we are being secretive, or acting secretively in any way. Let’s be open and honest about what we really want and what we really feel. This is a ‘Pride before the Fall’ aspect. Morals and principles should be based on our spiritual awareness, rather than our material or unconscious needs.

In London the Full Moon takes place in the 12th house of secrets and anything hidden; it will be hard for some of us to communicate freely due to insecurities and a lack of self confidence. The Moon in the 12th house brings in self doubt, a fear of loneliness and over sensitivity. We need to follow our own minds and be careful of manipulative people.

The Black Moon Lilith has been erratically flying through three signs these last few weeks, Leo, Virgo and Libra. Over the last few years Lilith has been erratically flying between Virgo and Leo bringing in a major rebirthing with those who have either of them as their Sun Sign! Libra is now being brought into the mix and those of you that have Libra as your Sun Sign , watch out and get to know the fears and issues of the Black Moon Lilith situated in your charts, you have begun to go through a major overhaul over the next few years.

At the time of the Full Moon, the Black Moon Lilith is in Virgo at 27 degrees and is in opposition to Uranus, this aspect creates a lot of nervous energy and anxiety as both Lilith and Uranus are of high energy, the good thing is, is that Lilith and Uranus don’t really take much notice of each other, since they are both independent and mutually respects each other’s space. But on the whole this aspect warns us of sudden changes that may take place in our lives and to beware of being blindly led into shadowy situations.

The energy is high this Full Moon and this would be a good time to relieve ourselves of what is not really working in our lives, regardless of the false sense of security that it give to us. We must be careful of not becoming a victims to a lost cause and be ready to embrace the change coming in that will enlighten our paths and take us where we need to be.