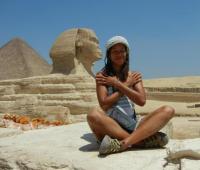 Tchiya Amet El Maat: MUSICAL HEALING AND DIVINE WELLNESS
As a renowned Healer, Teacher & Musician, Tchiya Amet offers expertise in the art of KemeTones:
Cosmic Sound Healing—which comprises Kemetic Sidereal Astrology, HeruScopes and Acutonics.
She also offers organic and academic talents as a singer, songwriter & keyboard artist, focusing on
the age-old connected rhythms of reggae, native, world and celestial music.
Born and raised in Chicago, Tchiya offers “first-nation” roots as a member of the Moor, Cherokee/
Tsalagi, Creole and Lakota Blackfoot tribes. She remains a contemporary Urban Indigenous Woman,
complemented by core ties with nature and a close affinity to land, water, animals, cosmos and spirit.
Indeed, Tchiya’s gifts of lyricism, music and performance allow her roots to reach the now, then and
the will be...
By the age of 8, she was composing musical creations on the piano with no formal training. Tchiya
later earned a Bachelor’s degree in Physics from Oberlin College—where she also studied at its
renowned Conservatory. There, she studied Jazz Piano and regularly performed with the Oberlin Jazz
Ensemble. To date, she has released three independent CDs: “Rise Again Truth”, “Black Turtle
Island,” and “Celestial Folk Music.” Her fourth CD, "TCHIYA AMET SURVIVES THE TEXAS
TORNADO" is a dub collection of the most popular songs from first two reggae collections.
Tchiya then studied Galactic Astronomy in the graduate program at the University of Texas in Austin.
It was during this life chapter that she learned about Natural Life and Healing, Yoga, and the Spirit &
Power of the Mind. Complementing her healing consciousness, alongside reggae music, the
Rastafarian and Black Hebrew Israelite Movements opened her eyes (and mind) to her current role
seeking and helping others to understand truth, history, health and culture.
Today, Tchiya offers expertise to others as a practiced yoga instructor, herbalist, and a proponent of
home-schooling, while guiding her own life as a vegetarian, professional musician, performing &
recording artist, festival producer, organic gardener, natural foods co-op organizer, cultural
astronomer—and most recently, acutonics (cosmic sound healing) practitioner and instructor.
Ultimately guided by the Sun and the Stars, Tchiya’s mission is focused on healing & awareness with
sound; creating and performing music inspired by the Ancient Wisdom (found in Cultural Astronomy);
Traditional & Contemporary Celestial Worldviews of Indigenous Peoples of the Four Directions; and
Acutonics, with the Music of the Spheres.
With her music, Tchiya shares the Teachings of the Four Directions, including Bhagavad Gita, the
Lotus Sutra, The Kybalion, the Kabala, Cherokee Legends, Lakota Sundance, & Maat from Kemet.
In 2014, a new avenue appeared, ushering in a cycle of intensive self healing from rape and sexual
assault from her younger days at Oberlin and UT Austin. Ending 30 years of silence, Blue Lotus
Speaks is a program geared towards ending sexual assault by raising awareness, offering healing
and promoting education. END THE SILENCE, END THE VIOLENCE is an event that takes place
every year on June 7, TCHIYA AMET DAY, in Austin, TX.
END THE SILENCE, END THE VIOLENCE a way of life.

Order Now a HERUSCOPES© READING AND CHART from Tchiya Amet at the price of $60.00 USD